Activate is the successor to the Lucene/Solr Revolution conference that our partner Lucidworks runs every Autumn and was held this year in Montreal, Canada. After running a successful Lucene Hackday on the Monday before the conference, we joined hundreds of others to hear Will Hayes, the CEO of Lucidworks, explain the new name and direction of the event – it was nice to hear he agrees with me that search is the key to AI. Yoshua Bengio of local AI laboratory MILA followed Will and described some recent breakthroughs in AI including speech recognition, image recognition and went on to talk about Creative AI which can ‘imagine’ new faces after sufficient training. He listed five necessary ingredients for successful machine learning: lots of data, flexible models, enough compute power, computationally efficient inference and powerful prior assumptions to deflect the ‘curse of dimensionality’. These are hard to get right – he told us how even cutting-edge AI is still far from human-level intelligence but can be used to extend human cognitive power. MILA is the greatest concentration of academics working in deep learning in the world and heavily funded by the Canadian government.

I was also pleased to notice our Luwak stored search library mentioned in the handout Bloomberg had placed on every seat!

The talks I attended after the keynote were generally focused on open source, Solr or search topics, but the theme of AI was everywhere. The first talk I went to was about Accenture’s Content Analytics Studio – which looks like a useful tool for building search and analytics applications using a library of widgets and a Python code editor. Unfortunately it wasn’t very clear how one might use this platform, with the presenter eventually admitting that it was a proprietary product but not giving any idea of the price or business model. I would much prefer if presenters were up-front about commercial products, especially as many attendees were from an open source background.

David Smiley‘s talk on Querying Hundreds of Fields at Scale was a lot more interesting: he described how Salesforce run millions of Solr cores and index extremely diverse customer data (as each one can customise their field structure). Using the usual Solr qf operator across possibly 150 fields can lead to thousands of subqueries being generated which also need to be run across each segment. His approach to optimising performance included analysing the input data per field type rather than per field, building a custom segment merge policy and encoding the field type as a term suffix in the term dictionary. Although this uses more CPU time, it improves performance by at least a factor of 10. David hopes to contribute some of this work back to Solr as open source, although much is specific to Salesforce’ use case. This was a fascinating talk about some very clever low-level Lucene techniques. 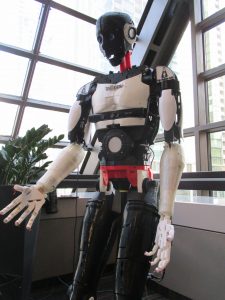 Next was my favourite talk of the conference – Kevin Watters on the Intersection of Robotics, Search & AI, featuring a completely 3D-printed humanoid robot based on the open source InMoov platform and MyRobotLab software. Kevin has used hundreds of open source projects to add capabilities such as speech recognition, question answering (based on Wikipedia), computer vision, deep learning etc. using a pub/sub architecture. The robot’s ‘memory’ – everything it does, sees, hears and how the various modules interact – is stored in a Solr index. Kevin’s engaging talk showed us examples of how the robot’s search engine powered memory can be used for deep learning, for example for image recognition – in his demo it could be trained to recognise pictures of some Solr commmitters. This really was the crossover between search and AI!

Joel Bernstein then took us through Applied Mathematical Modelling with Apache Solr – describing the ongoing work to integrate the Apache Commons Math library. In particular he showed how these new features can be used for anomaly detection (e.g. an unusually slow network connection) using a simple linear regression model. Solr’s Streaming API can be used to run a constant prediction of the likely response times for sending files of a certain size and any statistically significant differences noted. This is just one example of the powerful features now available for Solr-based analytics – there was more to come in Amrit Sarkar‘s talk afterwards on Building Analytics Applications with Streaming Expressions. Amrit showed a demo (code available here) using Apache Zeppelin where Solr’s various SQL-style operations can be run in parallel for better performance, splitting the job up over a number of worker collections. As the demo imported data directly from a database using a JDBC connector, some of us in the room wondered whether this might be a higher-performing alternative to the venerable (and slow) Data Import Handler…

That was the last talk I saw on Wednesday: that evening was the conference party in a nearby bar, which was a lot of fun (although the massive TV screen showing that night’s hockey game was a little distracting!). I’ll write about day 2 soon: videos of the talks are likely to be available soon on Lucidworks’ Youtube channel and I’ll update this post when they appear.